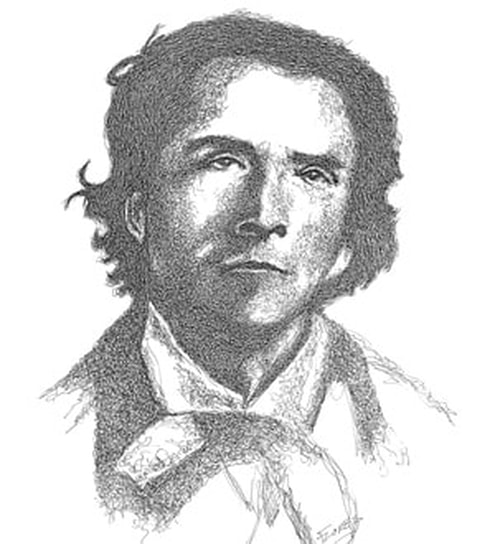 Theodore Dwight Weld, abolitionist lecturer, author, and educator, was born in Hampton, Connecticut on November 23, 1803. His father, Ludovicus Weld, was the minister of the Hampton Congregational Church. His mother Elizabeth Clark Weld, was related to such New England clerical luminaries as Jonathan Edwards and Timothy Dwight. When Theodore was six years old, an African American boy named Jerry entered as a student in his common school. The teacher segregated Jerry from the rest of the class and treated him with casual cruelty. In an act of courage, Theodore asked to be seated next to Jerry. After this early awakening to racial inequality, Weld entered Phillips Academy Andover in 1819, but due to eyesight problems, he left school and began to develop his public speaking skills. After his family relocated to central New York, Weld enrolled in the Oneida Manual Labor School in Whitestown. Like Andover, the school’s mission was to train ministers, but it combined study with outdoor labor in order to build strong bodies. In 1832, when the Oneida school failed to live up to his ideological expectations, he led a cohort of his fellow students to a new school devoted to the principles of manual labor: the Lane Theological Seminary in Cincinnati, led by the minister Lyman Beecher.

At Lane Seminary, Theodore Weld converted to immediate abolitionism. Weld and other abolitionist students organized a series of debates over eighteen days in February 1834 in order to convert their fellow students and faculty away from colonization and toward immediate abolition. In the wake of the debates, known as the Lane debates, students organized an anti-slavery society, but they also undertook something even more scandalous: they devoted themselves to aiding the black population of Cincinnati. Beecher and the other professors attempted to reassert their authority and end such activities, but, in the end, Weld and the other so-called Lane rebels left the seminary.

After leaving Lane Seminary, Weld became a lecturer for the American Anti-Slavery Society.  As the anti-slavery agent for Ohio, charged with converting westerners to the idea of slavery as a national sin, Weld became known as the most mobbed man in America. On May 14, 1838, Theodore Dwight Weld married fellow-abolitionist lecturer Angelina Grimké at the home of her sister in Philadelphia. No minister or judge presided. The couple simply held hands and stated their vows before their assembled friends and relatives. Rejecting the legal power of husband over wife (married women’s status was that of a feme covert, or an economic and political dependant), Weld  “abjured all authority, all government, save the influence which love would give to them over each other as moral and immortal beings.” The couple invited an interracial group of guests, many with strong abolitionist credentials, including Maria Weston Chapman, Abby Kelley Foster, William Lloyd Garrison, Gerrit Smith, Henry B. Stanton, and Lewis Tappan. Their wedding was the opening event in a week-long abolitionist celebration. Long excluded from churches and meetings halls for fear of mob violence, Philadelphia abolitionists had raised $40,000 to build their own (in Weld’s words) “Temple of Freedom.” On the same day of Theodore and Angelina’s wedding, Pennsylvania Hall opened with a week of scheduled programs. On May 18, 1838, just days after the opening speeches, a mob burned Pennsylvania Hall to the ground.

Pennsylvania Hall marked the end of Weld’s career as an anti-slavery lecturer. Theodore, Angelina, and her sister Sarah, who lived with them for most of their married lives, poured over 20,000 southern newspapers in order to produce American Slavery As It Is, which influenced Harriet Beecher Stowe’s celebrated Uncle Tom’s Cabin.  Published in 1839, the volume condemned slavery using the experiences and words of unwitting white southerners as evidence. In the early 1840s, Theodore Weld moved temporarily to Washington D.C. to do research for Senator John Quincy Adams, who was then actively engaged in a battle over the gag rule on anti-slavery petitions. In 1848, Theodore, Angelina, and Sarah started a school on their farm in Belleville, New Jersey. Their abolitionist friends enthusiastically endorsed the project by enrolling their own children. In 1853, Marcus Spring invited the Welds to run the school in his new Utopian venture, the Raritan Bay Union. The school, a co-educational and racially integrated institution, lasted until 1862. Theodore Dwight Weld outlived his wife, and many of his allies, dying on February 3, 1895, in Hyde Park, Massachusetts, at age 91.
Back to Inductees