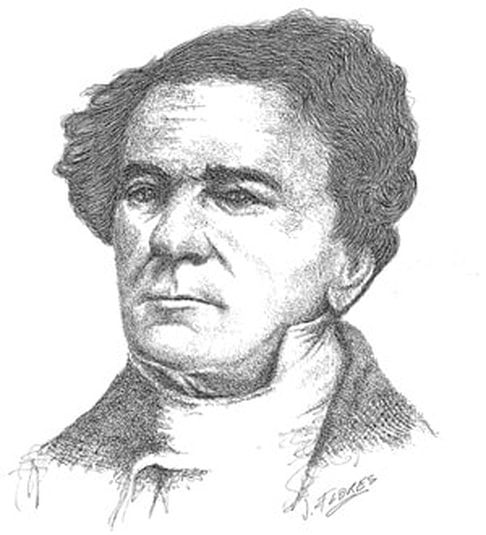 Lewis Tappan, born May 23, 1788, Northampton, Massachusetts, was an American philanthropist, merchant and industrialist who used much of his energy and his fortune in the struggle to end slavery.

The New York Times described Lewis Tappan as “one of the pioneers in the movement for the abolition of slavery in this country” in his obituary notice published in 1873. Though initially a supporter of the American Colonization Society and its plan to send freed African Americans to Africa, Tappan converted to the crusade to eradicate slavery and helped to found the American Anti-Slavery Society in December 1833. He remained a prominent antislavery advocate and social reformer for most of his adult life.

Raised in a deeply religious household, Lewis Tappan applied his evangelical beliefs to a host of reform causes. He prospered in the dry goods business, especially in a silk importing firm with his partner and brother Arthur Tappan. He gave liberally to the American Anti-Slavery Society and helped to publish The Emancipator. Lewis Tappan and Arthur Tappan provided the financial backing for the establishment of Oberlin College, Oberlin Ohio, where black and white students were educated together in an abolitionist environment. Lewis Tappan’s name can be linked with efforts to eliminate racial segregation (“the black pew”)in American churches, educational reform, and the Underground Railroad.

​Lewis Tappan’s anti-slavery zeal was so well known that it drew him many allies, such as Theodore Dwight Weld, but also enemies. A pro-slavery mob broke into his dwelling on July 4, 1834, carrying his furniture out to the street and setting fire to it. When the American Anti-Slavery Society split in 1840, Tappan took a leadership role in establishing the American and Foreign Anti-Slavery Society.

Lewis Tappan took a leading role in defense of the Africans in the Amistad trials of 1841, not only by helping achieve their release but also by arranging for their tutoring in English. He helped in the return of the Amistad Mendians to Africa with the intention of fostering the spread of Christianity. Using the Amistad Committee as a nucleus, He aided in the formation of the American Missionary Society in 1846, an organization that did extensive work among the freed people after the Civil War. He had supported the Republican Party and the emancipation efforts of Abraham Lincoln.

​Lewis Tappan retired from his extensive business interests in 1866 and passed away in 1873.
Back to Inductees