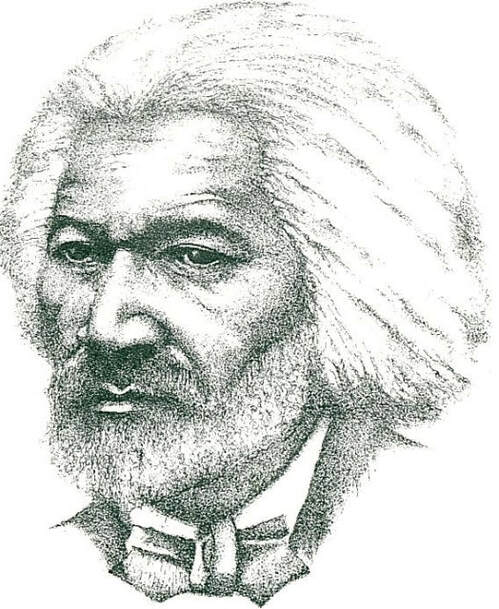 Frederick Douglass was born in a slave cabin, in February, 1818, near the town of Easton, on the Eastern Shore of Maryland. Separated from his mother when only a few weeks old he was raised by his grandparents. At about the age of six, his grandmother took him to the plantation of his master and left him there. Not being told by her that she was going to leave him, Douglass never recovered from the betrayal of the abandonment. When he was about eight he was sent to Baltimore to live as a houseboy with Hugh and Sophia Auld, relatives of his master. It was shortly after his arrival that his new mistress taught him the alphabet. When her husband forbade her to continue her instruction, because it was unlawful to teach slaves how to read, Frederick took it upon himself to learn. He made the neighborhood boys his teachers, by giving away his food in exchange for lessons in reading and writing. At about the age of twelve or thirteen Douglass purchased a copy of The Columbian Orator, a popular schoolbook of the time, which helped him to gain an understanding and appreciation of the power of the spoken and the written word, as two of the most effective means by which to bring about permanent, positive change.

Returning to the Eastern Shore, at approximately the age of fifteen, Douglass became a field hand, and experienced most of the horrifying conditions that plagued slaves during the 270 years of legalized slavery in America. But it was during this time that he had an encounter with the slavebreaker Edward Covey. Their fight ended in a draw, but the victory was Douglass ', as his challenge to the slavebreaker restored his sense of self-worth. After an aborted escape attempt when he was about eighteen, he was sent back to Baltimore to live with the Auld family, and in early September, 1838, at the age of twenty, Douglass succeeded in escaping from slavery by impersonating a sailor.

He went first to New Bedford, Massachusetts, where he and his new wife Anna Murray began to raise a family. Whenever he could he attended abolitionist meetings, and, in October, 1841, after attending an anti-slavery convention on Nantucket Island, Douglass became a lecturer for the Massachusetts Anti-Slavery Society and a colleague of William Lloyd Garrison. This work led him into public speaking and writing. He published his own newspaper, The North Star, participated in the first women's rights convention at Seneca Falls, in 1848, and wrote three autobiographies. He was internationally recognized as an uncompromising abolitionist, indefatigable worker for justice and equal opportunity, and an unyielding defender of women's rights. He became a trusted advisor to Abraham Lincoln, United States Marshal for the District of Columbia, Recorder of Deeds for Washington, D.C., and Minister-General to the Republic of Haiti.

Frederick Douglass sought to embody three keys for success in life: believe in yourself​, take advantage of every opportunity, and use the power of spoken and written language to effect positive change for yourself and society.

​Douglass said, "What is possible for me is possible for you."By taking these keys and making them his own, Frederick Douglass created a life of honor, respect and success that he could never have dreamed of when still a boy on Colonel Lloyd's plantation on the Eastern Shore of Maryland.
Back to Inductees