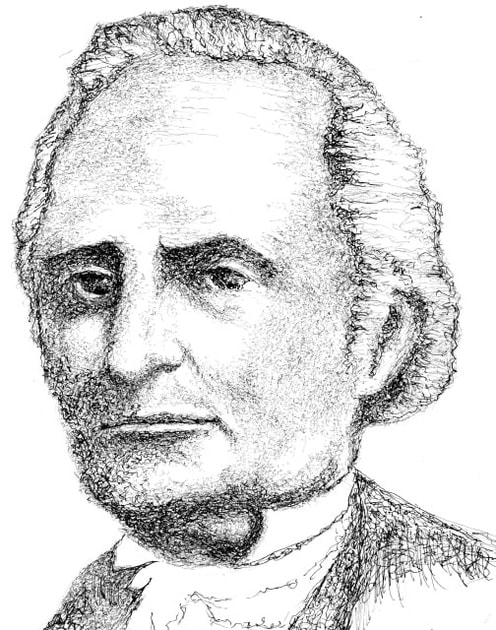 John Rankin (1793-1886), a white southerner by birth, was active in the original burst of antislavery sentiment from the American Revolution and Second Great Awakening. He joined the Manumission Society of Tennessee in 1815. Licensed as a Presbyterian minister in 1817, Rankin commenced preaching that slaveholding was sinful. After Presbyterian leaders warned Rankin that he should never repeat such views from Tennessee pulpits, Rankin decided to migrate with his family to free territory. When Rankin reached Kentucky, however, he accepted the ministerial position at the antislavery Concord Presbyterian Church in Nicholas County. In 1822, a combination of growing personal danger and financial problems persuaded Rankin to relocate to Ripley, Ohio, where he remained for the rest of his life.
In 1824 Rankin learned that his brother Thomas, a Virginian, had become a slaveholder. He composed a series of Letters on Slavery to his brother that became one of the earliest and most effective calls for immediate emancipation. It was originally published serially in Rankin’s hometown newspaper, the Castigator, but a Cincinnati publisher brought the work out in book form in 1826. Rankin’s Letters was subsequently republished numerous times. It was one of the first books issued by the newly launched American Anti-Slavery Society in 1833.

Rankin became the principal founder of an antislavery denomination. When the Presbyterian Church divided into New School and Old School factions in 1838 over evangelicalism, Rankin sided with the New School but continued his labor to persuade that new denomination to deny membership to slaveholders. “Comeouterism” among New School Presbyterians began in 1846, when their General Assembly overruled the suspension of a proslavery minister. In reaction, Rankin and ten other Midwestern ministers renounced the New School Presbyterian jurisdiction and founded the independent Free Presbytery of Ripley. In November 1847, the Presbyterian comeouters formally united into the Free Synod of Cincinnati, later renamed the Free Presbyterian Church. Under Rankin’s leadership, their most valuable contribution was the relentless exposure of the proslavery practices of the major Presbyterian denominations.

John Rankin was one of the nation’s best-known Underground Railroad conductors, and the source for the real-life story that inspired Harriet Beecher Stowe’s fictional character, Eliza Harris, in Uncle Tom’s Cabin. In 1838 he helped a runaway slave who crossed the partially-frozen Ohio River, carrying her two-year-old baby in her arms. In partnership with African American John Parker , the two men and their families turned the small village of Ripley, Ohio into one of the key crossing points over the Ohio River for fugitives fleeing slavery, assisting approximately 2,000 runaways. Rankin’s notoriety grew among embittered Kentuckians so that a $3,000 bounty was placed on his head. His home was targeted by armed slave owners and hunters demanding to search for runaway slaves.  Yet Ripley’s Underground Railroad conductors boasted that never once had a slave been recaptured who reached their community.

Rankin’s strong religiously-inspired abolitionist principles led him to battle against slavery for more than four decades. He was a significant bridge between the first generation opponents of slavery and the later immediate abolitionists. Rankin also represents tens of thousands of antislavery Southerners, who chose to migrate out of that region in protest to human bondage.
Back to Inductees