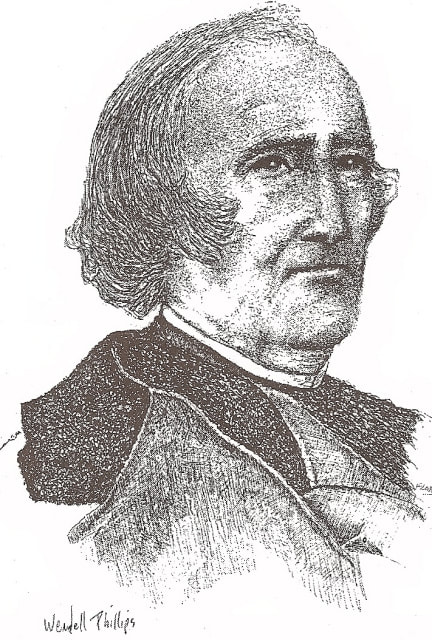 Wendell Phillips, by far the foremost orator of the abolitionist movement, was born on November 29, 1811 in Boston, Massachusetts. His distinguished family had come from England to the Massachusetts Bay Colony in 1630. His father was a wealthy and influential lawyer, who, among other public offices, served as the first mayor of Boston in 1822. Wendell Phillips took the expected steps of a wellborn, aristocratic Bostonian and attended Boston Latin, Harvard College and Harvard Law School. He graduated from law school in 1833 and entered practice the next year. Phillips studied rhetoric and oratory for four years at Harvard College under the tutelage of Edward T. Channing, who debunked the popular flowery rhetoric of the day and instead emphasized simplicity, a distinguishing feature of the later speeches of Phillips.

He was in his Boston law office on Court Street on October 21, 1835 when a mob of several thousand stormed the Anti-Slavery Office on Washington Street and dragged out William Lloyd Garrison, tied him up and came very close to hanging him. To his surprise Phillips observed that the mob was largely composed of “gentlemen of property and standing”, a number of them his friends and acquaintances. Phillips dated his “conversion” to the abolitionist cause from that event. He met with Garrison the following year. Much to the horror and chagrin of his family and Beacon Hill acquaintances he became a member of the Massachusetts Antislavery Society. Some of his relatives planned to have him committed to a lunatic asylum. On June 14, 1837 in Lynn, Massachusetts, he attended an antislavery convention for the first time and delivered his maiden speech. That year he left his law practice to devote himself to the abolitionist cause. But it was the speech he delivered on December 8, 1837 which moved him to the forefront of the abolitionist orators. On November 7th of that year a newspaper editor, Elijah Lovejoy, had been murdered by a proslavery mob in Alton, Illinois, and around five thousand Bostonians thronged Faneuil Hall on December 8th for a protest meeting. One of the speakers, James Austin, the Attorney General of Massachusetts, took the floor and harangued the meeting, denouncing Lovejoy, claiming that he “died as the fool dieth”, and comparing his murderers to the patriots who threw the tea into the harbor at the Boston Tea Party prior to the American Revolution. The crowd roared its approval. Phillips then mounted the platform and delivered a passionate counterattack, pointing to the portraits of some of those same patriots which hung in Faneuil Hall, and stating that they would have rebuked Austin, who he called “slanderer of the dead.” The speech brought the crowd around and vaulted him to fame.

​Phillips was a Garrisonian abolitionist, believing, like Garrison, that the union would have to be dissolved to achieve abolitionist goals. He spent a large part of his public life on the speaker’s platform with a focus on abolitionism. Unlike most of his contemporaries, he spoke in a colloquial, direct style and was a master at engaging the hecklers, rioters and obstructers of abolitionist meetings. He gave the prime of his life to the cause and after the start of the Civil War he was at times critical of Abraham Lincoln and his administration. When Garrison resigned as President of the American Antislavery Society in 1865 at the close of the Civil War, Phillips took the reins and continued in that capacity until April of 1870 when the Society was disbanded upon the passage of the Fifteenth Amendment which gave the right to vote to African American men (white men already had the right to vote).

​For the remainder of his life he agitated for the women’s rights, prohibition and other reform causes, never forgetting the African Americans. As he said during the battle for passage of the Fifteenth Amendment: “The great struggle between Equality and Caste, between free institutions and a government founded on race –is not, by any means, ended. The rebellion was only a preliminary skirmish. To your tents, O Israel.”